No fewer than four buildings and five cars were burnt yesterday when a petrol tanker fell at Ojuelegba area of Lagos.

The tanker, it was gathered, was ascending the bridge at the early hours of yesterday when it fell and spilled its content which led to the fire outbreak.

Despite frantic efforts to prevent the spillage from resulting into fire outbreak, the tanker eventually burst into flame, burning four houses and five cars.

There was confusion in the neighbourhood as soon as the fire started as residents fled their houses to avert being burnt, even as the fire spread through the drainage into the affected houses.

Akindele, who said no life was lost, confirmed that one house was completely razed while three others were partially burnt, adding that five vehicles were also burnt in the inferno.

He thanked God that the tragedy occurred at night, saying that lives might have been lost if the fire had been in the day time. 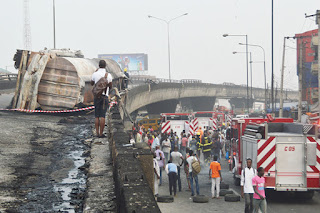