Home Education “Academician” Or “Academic”? Q and A on Nigerian English errors and usage

“Academician” Or “Academic”? Q and A on Nigerian English errors and usage

Although many Nigerians, including Professor Wole Soyinka, use “academicians” and “academics” interchangeably, they are in error. Find out why in today’s Q and A. Also find the difference between a “house” and a “home,” between the expressions “it’s me” and “it’s I,” and other usage questions.
Question:
What is the difference between an “academic” and an “academician”? I see both words used interchangeably in Nigerian English. Is this correct?
Answer:
Let me answer you this way: you will probably never have a reason to use the word “academician” if you speak or write Standard English. Most people who use “academician” are either non-native English speakers or uneducated native English speakers.
So what is the difference between an “academician” and an “academic”? Well, an “academic” is someone who teaches or conducts research in a higher educational institution, typically in a university. In British and Nigerian English, academics are also called “lecturers.” In American English, they are called “professors.”
An “academician,” on the other hand, is a person who works with or is honored with membership into an academy, that is, an institution devoted to the study and advancement of a specialized area of learning such as the arts, sciences, literature, medicine, music, engineering, etc. Examples of academies are the Nigerian Academy of Letters, the Royal Academy of Arts, the Royal Academy of Music, the Royal Academy of Engineering, the Royal Swedish Academy of Letters, History and Antiquities, the National Academies of Sciences, Engineering, and Medicine, etc.
Not all academics are academicians and not all academicians are academics. In other words, you can teach in a university, polytechnic, college of education, etc. and never be made a member of an academy, and you can become a member of an academy without ever being a teacher or a researcher at a higher educational institution. Note that while mostacademicians are also academics, most academics are never academicians.
A little note on pragmatics is in order here. Although many dictionaries have entries that say “academician” and “academic” can be synonymous, this isn’t really the case in actual usage, at least among educated native English speakers. It is considered illiterate usage in British and American English to call higher education teachers and researchers “academicians”; they are properly called “academics.” Many dictionaries merely capture the entire range of a word’s usage without discriminating socially prestigious usage from uneducated or archaic usage.
That is why I was disappointed when Professor Wole Soyinka used “academician” as if it meant “academic” in a 1971 newspaper article. In the article, he wrote: “What I would have expected of an academician was the advocation [sic] of a social system whereby the life of a decent [living] was guaranteed and the benevolent patronage of the privileged groups was eradicated for all time.
“DrIsong’s cry if any should be directed against a social system which binds both him and his dependants in a vice of mutual degradation and limits his freedom of action and development by denying him equality in his association with all the potential inherent in every class of society” (quoted in James Gibbs and BernithLindfors (1993), Research on Wole Soyinka, pp. 243-244).
Dr. A. J.  Isong, whom Soyinka called an “academician,” wasn’t a member of an academy; he was an “academic,” that is, a lecturer, at the University of Ibadan. I think it helps to point out that “academic” is derived from “academia” (pronounced aki/deemia) or “academe” (pronounced aki/deem), which means a place of (higher) learning such as a university or, as the Online Etymology Dictionary puts it, “the world of universities and scholarship.” “Academician,” on the other hand, is derived from “academy” (pronounced as “aka-demi”), which is an institution dedicated to the pursuit of advancement in a narrowly defined field of knowledge.
Henry Watson Fowler, the famou 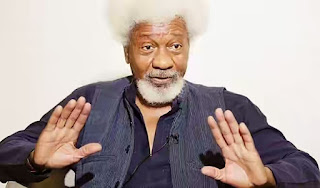