Posted by Unknown On December 05, 2015
Tags
A semi final ticket is up for grabs as the Nigeria U-23 team, the Dream Team VI take on their Algerian counterparts in their final group game at the ongoing Africa U-23 Championships in Senegal.
Having previously played their earlier two games in M’Bour, the Dream Team VI are in Dakar to fight for a semi final ticket and by extension keep their hope alive for a place at next year’s Rio Olympics.
Algeria comes into Saturday’s game as the top team in Group B and they are sure of qualifying for the semi finals once they avoid defeat against the Coach Samson Siasia led team.
However a draw may not be adequate for Nigeria as Egypt that are presently in third-place may gate crash the semi final party once they get a two-goal margin victory over their opponent Mali who are already out of contention.
The Nigeria Vs Algeria as well as the Egypt Vs Mali game will take place simultaneously from 6.pm.
Stay here for live updates as we await the two teams that will join hosts Senegal and South Africa in the semi finals.
Dream Team VI XI vs Algeria
Daniel E.
Seth S
Oduduwa S.
Amaefule T.
Ndifreke E.
Azubuike O.
Godspower A.
Usman M.
Kufre E.
Etebo O.
Junior A
Live Blog
19.56
Algeria and Nigeria progress to semi final as Egypt lost 0-1 to Mali. Thanks for staying here with us. Good night.
19.55
Coach siasia has brought in Victor Osimhen for Junior Ajayi.. Oshimen was the MVP at the FIFA U17 World Cup but no action for Victor as referee blows final whistle.
19.54
Four minutes extra time to be played here in Dakar. Algeria attempts a fast counter-attack but could not get the goal they craved for.
19.49
Coach Siasia understandably still looking tensed as its not yet done and dusted for Nigeria.
19.48
Another chance for Nigeria but Etebo's close range effort parried for a corner kick. Yellow Card for Nigeria as Captain Azubike is booked for rough tackle.
Salah in for Quassama as Algeria make a change upfront.
19.42
Senegal U23 team and their officials are in the stands as they take a first hand look at Nigeria and Algeria, one of whom they are set face in the semis.
19.41
Chance for Nigeria but the Algeria defense make a frantic clearance.
19.35
Penalty appeal by Nigeria as Tingoli goes down in the box but referee waves play-on .
19.31
Regardless of their poor play, Nigeria has more ball possession 53% to Algeria's 47%.
19.31
Still 1-0 in the other game between Egypt and Mali. Nigeria still on course to qualify if it ends same way in the the two centers.
19.26
Another Nigeria change. Ebong Eyo out for Taiwo Awoniyi. Will Awoniyi finally live up to his billing? He has not been at his very best at this tournament so far.
19.24
54 - Sub for Nigeria as Tiongoli Tonbara comes on for Godspower Aniefok.
Improvement!!! This is the first time in three matches that Samson Siasia has not conceded a goal by the 55th minute.
19.14
51mins - Azubuike floors Mohammed Benkhemassa with a robust challenge with the Algerian needing treatment off the field.
19.11
49mins - Daniel makes a good save with his left leg from Abderrahmane Meziane Ben Taharm.
19.10
2nd half underway with the Nigerians trying to crank up some more pressure but the Algerians get the first corner kick of the second stanza.
18.48
Half-Time - Nigeria 0-0 Algeria. Not too many clear cut chances in the first half as the two sides seem to cancel themselves out.
18.45
40 mins - Very scrappy affair so far with the Nigerians giving away many fouls and the Algerians trying to milk some sympathy from the referee.
18.40
In the other match, Mali are 1-0 up against Egypt and as it stands Algeria and Nigeria will go through to the semis.
18.37
32 mins - Etebo nearly opens the the score with a near-perfect free kick that hits the upright and the goalkeeper makes teh save.
18.30
The Dream Team VI far from impressive so far. Match is still goalless.
18.04
Match underway and Algeria already with the first corner of the game.
Nigeria also get her first free kick of the game after an Algerian player was guilty of 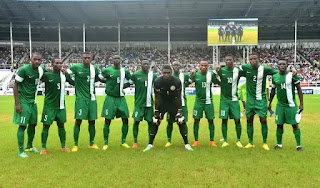