Short Bytes: YouTubes Sam Pepper knows very well how to attract controversy. His latest video “KILLING BEST FRIEND PRANK” is being bashed for being disturbing and violating YouTube community guidelines. While YouTube has refused to take down this video, Anonymous has issued him a 24-hour  warning.

Former Big Brother contestant and YouTuber Sam Pepper has been recently facing backlash over his latest controversial video named “KILLING BEST FRIEND PRANK”. Viewers have labelled this video as harmful and dangerous that promotes violence and sensationalism.
However, according to BBC, YouTube says that this video doesn’t break any YouTube guidelines. This 5-minute long clip shows “kidnapping” of Viner Sam Golbach and his friend Colby Brock being “shot dead” in front of his eyes.


By now, if you haven’t come across the video, you can see it below.

Warning: Contents of this video may be disturbing to some viewers

While YouTube has said that video will stay on the website, the hacktivist group Anonymous has issued a warning to Sam Pepper.

The collective has given him a 24-hours deadline to take down the video or “he will incur the wrath of Anonymous”.

BULLETIN: Sam Pepper has exactly 24 hours to take down the video titled “KILLING BEST FRIEND PRANK” or he will incur the wrath of Anonymous.

What do you think about Sam Pepper’s KILLING BEST FRIEND PRANK? Tell us in the comments below. 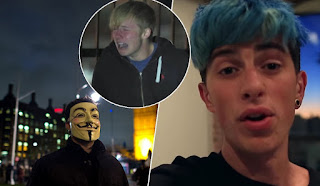