The All Progressives Congress candidate in the December 5 Bayelsa State governorship election, Timipre Sylva, has asked the Independent National Electoral Commission to announce the results from the Southern Ijaw Local Government Area and declare a winner in the elections.
After collating election results in seven local government areas, INEC cancelled the election in Southern Ijaw LGA on Monday, December 7, thereby declaring the election inconclusive.
The reasons given by the electoral body for the cancellation were violence, abduction of electoral officials and snatching of election materials.
The Peoples Democratic Party’s candidate and incumbent governor, Seriake Dickson, leads from the results of so far collated and announced.
INEC has fixed Saturday, December 19, for a supplementary election in Southern Ijaw LGA.
But Mr. Sylva said while violence occurred in Southern Ijaw LGA, the commission erred in scheduling fresh polls.
In a petition to INEC Chairman, Mahmood Yakubu, copied to the Attorney General of the Federation and Minister of Justice, Abubakar Malami, Mr. Sylva said the commission lacked the powers to cancel “already concluded or on-going election”. 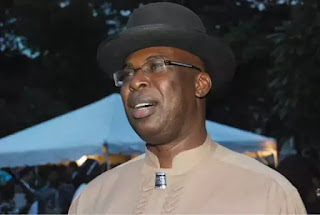