Bida is one of the villages under Monguno local government, and it hosts a market once-popular for livestock and agricultural produce, before Boko Haram insurgents sacked residents, making the market their very own. About 30 kilometres from Monguno town, the hometown of National Security Adviser, Major-General Babagana Monguno (rtd), the insurgents have fixed every Sunday as their market day, where business starts from 11:00am to wind up by 1:00pm, with only able-bodied men seen either buying or selling. Most of the buyers, Daily Trust learnt, are bulk buyers, except a few villagers, on whose faces discomfort can be seen.
At Bida market, 20 litres of petrol sells for N12,000 instead of the N3,000 it goes for in Monguno town. Prices of commodities like rice, tomatoes and other vegetables are extremely high, sources revealed, most times double the going price elsewhere. Roasted meat, otherwise known as Suya, believed to be made from rustled cows and other livestock, is also sold at one corner of the market, by long-bearded young men in long dresses and turbans, the type banned in the state. Most patrons of the market throng the stand, sampling the spicy delicacy.
A commodity supplier who braves the market on a weekly basis, identified himself as Alhaji Mala, said: “The insurgents around this area were killing anyone they could at a point, but when they decided that everywhere has been blocked and they had no means of getting fuel and food supplies, they realized using Bida market was their best option. Another problem they faced was how to get goods supplied to the market, because they have already looted the area, and killed all the young men in the surrounding villages. They had also rustled all the livestock there, with the few people left only able to grow millet, as the insurgents seem to dislike that particular grain. It was at that stage that they allowed some businessmen to be supplying the market with goods, accepting high prices as they know the difficulty of trading there.”
But another businessman told Daily Trust that there is no way anyone can head towards Bida with even sachet water, because soldiers in Monguno have blocked all the routes. “You’ve seen how we came, from Maiduguri and along the road we were telling the soldiers, Civilian JTF and other security forces that the goods were Monguno-bound. But after Gajiram, we park and offload as if we want to change our tyres, then use cattle-cart to continue along bush paths.”
The source continued: “The Amir commanding and directing the affairs of all the insurgents in this area lives in Debere, whose over 200 inhabitants are Boko Haram conscripts, living with him. But majority of the foot soldiers of the group are living in Kulli. Some of the traders make bulk supplies direct to Kulli where the insurgents collect the goods and pay in bulk. But we take our goods to Bida market and sell every Sunday. We are not members of the group, we have nothing to do with insurgency, just businessmen doing business.”
The source added that the insurgents are indeed running short of fuel and food. “Sometime last year, whenever they loot a community, they use vehicles to cart away swag. But for almost five months now, we have not been seeing them with vehicles. They use stolen cows and motorcycles. Again, in the past, they used be two or three riding motorcycles, but now up to four of them do so, possibly because they cannot fuel many bikes at once,” he said.
When Daily Trust asked why the traders trade with insurgents, rather than report their activities, another source said: “Where are those Bulamas and Lawans (streets and ward traditional rulers) that gave the security agencies information about the insurgents in 2010 and 2011? They were all killed, of course.” He added that nothing was done to security agents who trade information given to them by the traditional rulers. “Why should I think of giving them any information?” he asked.
In a convoy of cart riders passing through 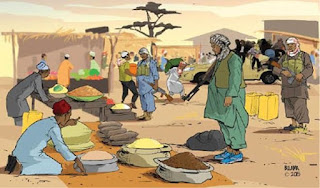