Enugu division of the Appeal Court has upheld the election of Senator Ike Ekweremadu as valid candidate for Enugu West Senatorial District.

A statement from the media office of Ekweremadu said the appeal court judgement was delivered on Monday in Enugu. Reacting to the judgement, Ekweremadu, who is Deputy President of the Senate, expressed satisfaction with the ruling of the court.

Ekweremadu said he was never perturbed as the mandate handed to him by his people was “free, fair, credible, resounding, and therefore incontrovertible.”

The lawmaker, who said he did not begrudge his challenger for trying his luck at the tribunal, restated that his major concern was to provide quality representation to his constituents and the nation in general. He said: “This is the beauty of democracy.

My challenger exercised his democratic right. It is also democratic and reassuring that the appellate court has upheld the return made by the lower tribunal on my election.

“I thank my constituents and the good people of Enugu State for their prayers, goodwill, and immense faith they have continued to repose in me.

Let me also reassure them that I will never let them down. I will continue to work for the common good and to justify every bit of confidence reposed in me.” It would be recalled that Ekweremadu polled 120,075 votes to re-emerge senator for Enugu West Senatorial District in the 2015 general elections.

However, although his closest rival of the All Progressive Congress, APC, Mrs. Louisa Achieze, who polled 2,314 had openly accepted the result and congratulated Ekweremadu, Mr. Philip Chukwudi Eze had approached the threeman National Assembly Election Petition Tribunal sitting in Enugu to challenge Ekweremadu’s victory on the ground that he was the rightful candidate of APC.

The petition was thrown out for lack of merit by the tribunal headed by Justice Michael Edem. It also awarded a total sum of N60,000 in favour of the Deputy President of the Senate. 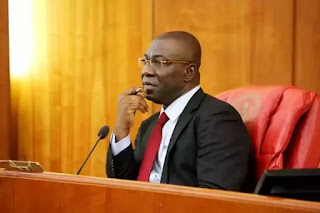