The Department of State Security (DSS) today issued a release disclosing that some its agents took part in robbing a Bureau De Change in Abuja. Curiously, the agency’s release, which was signed by a spokesman, Tony Opuiyo, failed to provide details of the robbery, apparently in an effort to cover up the ultimate ownership of the stolen money.

However, an investigation by SaharaReporters confirmed that the robbery took place on November 20, 2015 near the home of Senate President Bukola Saraki in Abuja.

Mr. Saraki had frequently used bureau de change agents to carry out money laundering since his days as governor of Kwara State, a fact detailed in police reports of his money laundering activities.

SaharaReporters learnt that when Mr. Saraki needed some cash with which to bribe judges handling his numerous challenges to his ongoing trial at the Code of Conduct Bureau, he often called on bureau de change agents to help transport the cash, sometimes after converting it to foreign currency, which is much easier to move around.

Our reliable sources, in confirming Mr. Saraki’s part in the bizarre heist, said the DSS had yet to determine the exact amount of cash Mr. Saraki was trying to raise at the time of the robbery, but they insisted it was in billions of naira.

A source familiar with the DSS investigations said the agency’s operatives attached to the Senate President were always aware of the senator’s procurement and movement of cash. However, on this occasion, Mr. Saraki decided not to use his DSS agents to escort the cash, since he feared “all eyes were on him and on some of his details, too.” Instead, the bureau de change operator was to make his own arrangement for police officers to accompany him as he moved the cash to Mr. Saraki’s home.

Unknown to both Senator Saraki and the bureau de change operator, the senator’s security detail had a plan of their own. They recruited some of their colleagues, including army Captain Hussein Ishaku Mshelia, to waylay the bureau de change operator on his way to Mr. Saraki’s home. The robbers stole the money by staging a perfect “sting operation.” The security agents who carried out the heist were dressed in DSS camouflage and strategically positioned themselves in and around Mr. Saraki's house.

As soon as the police escorts left, convinced that the DSS agents were truly on official assignment, the armed agents, among them some DSS operatives attached to Mr. Saraki, told the bureau de change operators that they knew where the money was being moved to and aware that the deal was illegal.

When the main bureau de change operator telephoned Senator Saraki to report his trouble, the senator instructed him not to mention his name at all. But Mr. Saraki did not know that some of the agents who had planned and executed the interception and heist were his security agents. Our source said Mr. Saraki initially thought the security men who had caught the bureau de change operator were from the Economic and Financial Crimes Commission (EFCC).

Thereafter, the DSS agents who planned the operation originally demanded N350 million in order to let the vehicle conveying the cash to move on. After much negotiation, they were paid N310 million.

Shortly after the robbery, the suspects were identified and detained at the agency’s headquarters in Abuja. Some of the suspects, confirmed to be SSS personnel 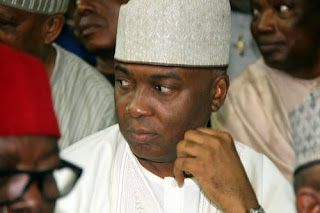