2
About 17 years ago, a female pilot, Captain Hadiza Oboh, was murdered in her Ikoyi residence, Lagos, allegedly by her domestic workers, who thereafter stole her property and personal belongings. FRANCIS FAMOROTI, Head, Judiciary writes.

The first and only female pilot with the defunct Nigerian Airways, Captain. Hadiza Lantana Oboh had a promising career in the aviation industry. Oboh, checked out as Flight officer with Nigeria Airways on B732, in the mid ‘80s.

Unfortunately, her rising profile was cut short by some greedy domestic workers she employed. The workers snuffed life out of her in her 43A, Bourdillon Road, Ikoyi resi­dence sometimes in 1998. Being a single lady, who was comfortable in every respect, the domestic staff orchestrated a plot to kill her and take over her property. They succeeded with their diabolical plan. The female pilot did not realise that she had placed her assail­ants on her payroll until she was strangled with a rope on the neck and she gave up the ghost. The assailants then dumped her body in a septic tank.

Prior to her death, Oboh was said to be ever lively. On that fateful day, she left the air­port and drove straight to her residence.

Barely 30 minutes later, she arrived her residence. Her gateman, otherwise known as mai gadi, Abdullahi, among other four persons were at the gate.

Sensing that madam had arrived, they rushed and flung the massive gates open. Oboh drove in and parked her Santana car in the compound.

That fateful day was not an exception as the worker that followed her into the expan­sive house had also noticed some foreign cur­rencies.

Beside the currencies, the workers were privy to the fact that Oboh had several wears, expensive laces, gold chains, rings, bracelets, state of the art electronic gadgets and shoes among other costly items in her wardrobe.

This obviously brought diabolical thoughts on their minds.

The gateman‘s petty trading spot at the entrance of the gate became a meeting post for the domestic servants, who hatched plans on how to murder their employer.

According to accounts of the incident, one of the masterminds of the plot was Pe­ter Iduwu Eche, who hails from Benue State. Though trained as an auto electrician, he was employed as a gateman and gardener in January 1993. He was recruited when Oboh sacked Abdullahi for gross misconduct. Pe­ter lived in a single room boy’s quarter as a service occupant inside the compound.

However, it was after Peter left for his vil­lage that the female pilot re-employed Abdul­lahi, pending Peter’s return. When Peter re­turned, Abdullahi co-opted him into the plot to kill Oboh ‘’because she get plenty money and property’’.

Peter quickly accepted the overtures to join the group and Abdullahi arranged for four assassins, obviously those who often met him at his petty trading spot.

As planned, the killers lurked around when Oboh drove in on the fateful day.

The unsuspecting pilot after relaxing for a while in her room stepped into her kitchen to prepare a dinner she never lived to eat.

Peter opened the gate for the four killers to sneak in and murder her employer. The killers came in through the rear kitchen door .Abdullahi sprang from behind and threw a rope noose round the pilot’s neck. As he tightened the rope, others attacked her.

Having killed Oboh, the assailants dumped her body in a septic tank in the com­pound. They sealed the tank with cement and went on looting spree of the deceased’s personal belongings.

Abduallhi, Peter and others looted the pilot’s belongings including her car, which they converted into an unpainted taxi. Items carted away included, bedroom furniture, fittings, electronics, refrigerators, air condi­ 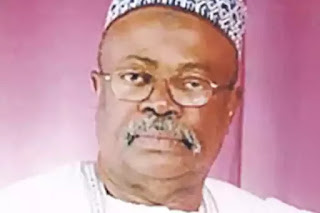