ASK PRESIDENT MUHAMMADU BUHARI what he thinks is the chief reason for the violence and insecurity in Nigeria, including the Boko Haram terrorism in the north-east, bloody wars between cattle herdsman and farmers in central Nigeria, erosion in the east and the environmental catastrophe in the costal regions and he will say, almost upon instinct that it's the climate change.


Garba Shehu
The new Nigerian president who promised to tackle the problem of climate change in his inaugural speech has spun a compelling narrative on the disappearing Lake Chad, the environment around the Chad basin and how these have become the problem of the economy of the neighboring states through the failure of agriculture and joblessness which in turn have provided an easy recruitment into violent extremism.  It was a narrative so compelling that it literally arrested the attention of the world as 190 countries met in Paris to agree on the first global agreement on climate change. President of the United States, Barack Obama took it from here, illustrating how the drying up of the lake is becoming a major factor in the migration of Africans to the west, and on account of which, he agreed with our President that the revival of the lake had become a global imperative. It will require 14 billion U.S. Dollars to divert East African rivers to empty into the lake, the kind of money President Buahri told world leaders that his country cannot pay. He therefore asked for global assistance.

President Buhari's speech at the conference centered on two major planks: one, Nigeria under him has the political will to secure its ecological interests and two, we will work with the rest of the world to protect the environment without compromising industrial development.

Starting with the Lake Chad, the President illustrated his awareness of the risk the changing climate presents to human security by recalling the richness of the waters and surrounding agriculture of the Lake Chad that attracted settlers, allowing the settled communities to enjoy education and comparable economic wellbeing. However, with prolonged drought and desertification, Lake Chad is now one-tenth of its original size,leading to poverty due to the failure of agriculture and fishing causing instability in the region that the insurgency of the Boko Haram has been able to cash in upon. The lake that once spread its territorial waters onto the four countries of the Lake Chad Basin Commission has now been reduced to a miserly presence on the Chadian territory, denying thereby direct access to its waters to Nigeria, Niger and Cameroon.

Traders in Baga, the major trading hub which the army just recovered from the Boko Haram said on a good day, five truck-loads of fish are now transported out of town, in stark contrast to the 100 a day that carried fish from the interstate market in the past.

Beyond the drought conditions of the Lake Chad, the President successfully showed the world Nigeria's vulnerability to climate change as manifested in the various ecological zones.

He cited the problem of soil erosion in the South as a consequence of "climate-change-related heavier and steadier than normal rainfall" that is worsening soil erosion in the subregion. "The recent increase in the number of reported severe landslides in the South-Eastern states of the country is an attestation to the possible climate change-induced changes in erosion intensity."

The President also reported on the sea-level rise, stating that Nigeria's coastline is already undergoing " pronounced morphological changes as a result of natural extreme events, such as sea surges and tidal waves." He projected that 35% of the highly-productive Niger Delta could be lost if nothing was done to stop the anticipated global warming-induced accelerated sea level rise of between half-a-meter to one meter. Much of Lagos, the nation's commercial capital will be abandoned if the sea waters rise by one meter.

Forests and other ecosystems, he not 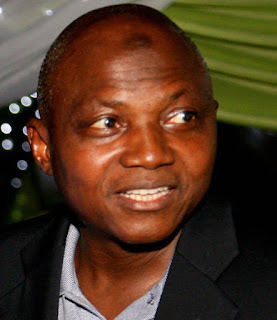