How do you feel being honoured by your people in Ogbomosho for being the 2nd SAN to have emerged from the town?

O yes, there is no doubt it is significant that it is now becoming a development in the town that people gathered together to recognise each other or help each other to encourage each other in whatever are; they feel they could and I am happy about it. Just like you know, law practice is a service calling and its just a challenge that a new platform has been created for me to be of greater service to the community, to the state and the country. It is not a chieftaincy title, it is a position of responsibility, a calling that requires more discipline, more industry, more circumspection and more determination to be of service to the community.


You have been involved in agenda setting for quite some time as a lawyer, attorney and former speaker of the house of Assembly; being a man of many parts, in what way do you think the younger generation can fit into this agenda for future development of our country?

There is no agenda for any country that is permanent, the challenges of each and every generation continue to change. In pre colonial times, the challenge was how to become independence; after we became independent, it became that of nationhood; after becoming a nation, there are new challenges springing up that we never knew before; jobs need to be regularly available, job is no more available, the price of oil used to be high, it is no more high; people used to be safe; they are no more safe; so agenda should respond to the reality that confronts society at every stage. So, the young ones should look at where they are, what are the questions in the present day life that they want to answer, and should have programmes in order to be able to answer all the questions.

You founded the Conference of Speakers in Nigeria, what were the objectives of the association when it was founded?

Are you satisfied with the way the houses of assembly are being run now?

I do not thing, it will be fair for me to compare because I am not in the house of assembly, I don’t know what is going on there, I believe those people that are there are doing their best.

There has been agitation for house of assembly autonomy what is you take?

What do they mean by autonomy? the constitution say there will be three arms of government, there is no arm that can be independent of the other; there are supposed to be checks and balances, they are supposed to mutually reinforce, they are supposed to be complementary to each other but if by autonomy you are talking about is financial autonomy, there is no organisation that does not have financial autonomy that can work well, because he who holds the purse will always dictate but if you want a house of assembly that will be independent, that will be courageous, the house of assembly that will be able to make laws without being inhibited, they should not depend on anybody for their funding, they should always have a direct access to their funding so that they can take decision that they believe are in the best interest of the society.

What can you say about the administration 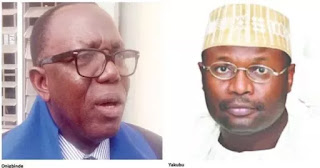