The Federal Government, yesterday, told a Federal High Court sitting in Abuja, why it was not in a hurry to release the detained leader of Indigenous People of Biafra, IPOB, Mr. Nnamdi Kanu, claiming that its investigations revealed that Kanu, who it identified as the brain behind recent clamour for the creation of ‘Biafra Republic’, had already received huge sums of money to purchase weapons.
Government in a counter-affidavit before the court, said that prior to his arrest, Kanu, had already made enquiries about prices of all the weapons he intends to buy.

In the counter-affidavit by a senior officer with the Department of State Services, DSS,  Mr. Ayo Ibitoye, it insisted that it would be in the interest of justice, peace and order, to allow the IPOB leader to remain in custody of the security agency.

It will be recalled Kanu who is also the Director of Radio Biafra and Television,    was on October 17, arrested in Lagos by security operatives, shortly after he arrived Nigeria from his base in the United Kingdom.

He was later arraigned before a Chief Magistrate Court in Abuja  over allegation that he engaged in  criminal conspiracy, managed and belonged to an unlawful society.

But on October 19,  pleaded not  guilty to the charge and was granted bail in the tune of N2million.

The court further directed the defendant to produce a civil servant of Grade Level 16, to stand as his surety.

However, the accused person alleged that the Nigerian government refused to release  him from detention despite the fact that he had met the bail conditions.

FG had while the matter was pending before the Magistrate court, secured an order from the high court to further detain Kanu for 90 days.

It was sequel to the  order that government lawyer,  Mr Moses Idakwo, asked Magistrate Usman to  step down from the trial on the ground that his court lacks the power and jurisdiction to prosecute terrorism charges.

Following an application by Kanu before the high court, seeking to enforcing his fundamental right to freedom, government filed a counter-affidavit, explaining why he will not been released, despite the clear orders of the court. 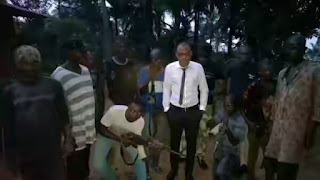