RELATED NEWS
I won't present myself for swearing-in as deputy governor in Kogi -- James Faleke
December 7, 2015
Faleke sues INEC, asks Court to declare him Kogi’s governor-elect
December 1, 2015
I will reconcile with Audu’s family, Kogi governor-elect says
December 6, 2015
Faleke's status in Saturday’s Kogi election unclear
December 4, 2015
Kogi Election: APC snubs Faleke, picks Yahaya Bello as guber candidate
November 30, 2015
The Kogi State governor-elect, Yahaya Bello, said he would not join issues with James Faleke, the running-mate of late Abubakar Audu, over Kogi governorship election crisis.
Following the declaration of Mr. Bello as governor-elect on Sunday, Mr. Faleke said he would not take oath of office as deputy governor.
Mr. Bello’s reaction is contained in a statements issued on Tuesday in Abuja by his media assistant, Suleiman Abdulmalik.
The governor-elect said dialogue remained the best solution to party issues, saying he had absolute confidence in the leadership of the party to end the disagreement.
He described Mr. Faleke as a brother, saying the political crisis happening in the state is a family affair.
“I will continue to appeal to him and others to join hands with me in moving Kogi State forward.
“In politics we agree and disagree but dialogue remains the only solution to issues, but what happens in my state is an act of God,” he said.
Mr. Bello disclosed that the ongoing reconciliation in the state had settled the political dispute, saying most of late Audu’s supporters were now with him.
“Those who matter in Audu’s camp are already working for me even before the supplementary election, and that reconciliation efforts greatly helped in defeating the PDP,” he said
The statement also advised Mr. Faleke to accept the outcome of the election as the will of God.
“All hands must be on deck and we must rally round the governor-elect, Alhaji Yahaya Bello. No winner, no vanquished; we must continue as one united family that we are.
“Hon James Abiodun Faleke and other aggrieved party members should accept the new development as the wish of God. We plead with them to cooperate with Bello to develop the state in line with the vision of our late icon, Prince Abubakar Audu.
“The governor-elect is a humble man who will not discriminate against anyone within the party. All Kogites should pray for and work towards peace, stability and progress of the state.
“We are using this opportunity to emphasise the need for the people to support their leaders for the benefit of all,” he said. 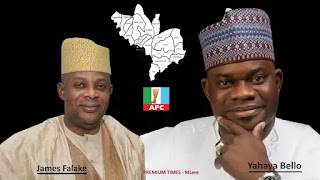