Mixed feelings in PDP as it wins, loses Senate seats.

an appeal filed by Chief Victor Umeh of the All Progressives Grand Alliance (APGA).

The judgment, as read by Justice Datijo Yahaya indicated that the election of Mrs Ekwunife on March 28, 2015 did not meet the prescription of the electoral act and therefore ordered a rerun in the Anambra Central Senatorial District within 90 days.

But later in the day, the sadness within the PDP camp gave way to smile when Prince Buruji Kashamu was declared winner of the Ogun East Senatorial District by the Court of Appeal sitting in Ibadan.

The Court of Appeal upturned the October 9, 2015 judgment of the National and State Assembly Elections Petition Tribunal in Abeokuta to reaffirmed and returned Kashamu as the validly elected senator for the district.

The appellate court in a unanimous decision held that Kashamu’s appeal is meritorious and therefore succeeds, consequently, the three-man panel set aside the ruling of the elections tribunal and affirmed as well as returned Senator Kashamu as the winner of the March 28, 2015 senatorial election in Ogun East Senatorial district
While reading the lead judgment, justice M.L Shuaib held that the tribunal erred and was partisan, adding that it descended into the arena and scouted for evidence to nullify Kashamu’s election and truncate his victory.

He added that it was curious, illogical and perverse of the tribunal to place so much reliance on the evidence of a prosecution witness labeled as PW 44 and further admit as evidence documents that were clearly inadmissible under the law and also act on such evidence to truncate Kashamu’s victory.

“There is no certification of the admitted print out by the said forensic expert so it is not an exhibit and he also sold himself out when he stated that the Appendix A, B and C which was his report was printed from a computer but the tribunal held that it was PW44’s statement on oath and not a print out,” the panel stated.

The three man panel further held that the case of Prince Dapo Abiodun and the All Progressive Congress is a non issue as the material used to nullify the results of elections in some polling units and order re-election is inadmissible in law.

“The case of the first and second respondents (Abiodun and APC) in this appeal collapses like a pack of cards as the respondents fail to lay necessary foundation for the admissibility of the annexes. Exhibits A, B and C are expunged as inadmissible

“PW44 was a hatchet man brought to truncate the appellant’s victory and since his testimony is that he thoroughly analyzed some documents from INEC’s register and used a computer to draw a table and print it out, the annexes are indeed a printout.

“It is wrong of the tribunal to place so much reliance on the evidence of a discredited witness and use an inadmissible document to arrive at its judgment.”

Last month, the Court of Appeal, Makurdi Division, annulled the election of the immediate past Senate President, Senator David Mark also of the PDP.

Mark’s victory at the March 28th., 2015 National Assembly elections, was challenged by Daniel Onjeh of the All Progressives Congress, (APC), who petitioned the Benue sta 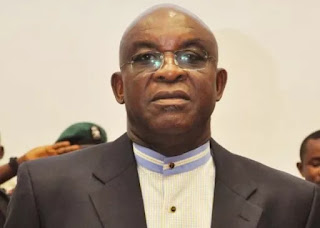