* Adds I’m in competition with no one
By Leke Adeseri, Regional Editor, South-West, Gbenga Olarinoye and Dapo Akinrefon
ILE-IFE — NEWLY-crowned Ooni of Ife Oba Enitan Adeyeye Ogunwusi has promised that a new Yoruba nation where youth empowerment is the focus will emerge during his tenure. Ogunwusi’s coronation is coming five months after the demise of Oba Okunade Sijuwade, who passed on at 85. The new Ooni is the 51st Ooni to ascend the throne, and his coronation came exactly 35 years and one day after the immediate-past Ooni, Oba Sijuade was presented the staff of office.

Installation ceremony of Oba Adeyeye Enitan Ogunwusi 51th Ooni of Ife
Remarkably, the ancient city of Ile Ife stood still yesterday, as he was presented with the staff of office and instrument of appointment. Roads leading to the palace was on lock down by security operatives, leaving a red carpet path for the monarch and invited dignitaries.
Guests and invitees from all walks of life thronged the palace to catch a glimpse of the coronation ceremony of the Ooni of Ife.
In fact, it took the intervention of security presence of the Army, Police, Civil Defence and other paramilitary organizations to control the crowd at the venue.
The ceremony, held at Afewonro Park, Enuwa, had in attendance dignitaries. It was full of glamour as groups attired in colourful dresses adorned the perimeters of the venue. Traditional rulers from different climes, including the Sultan of Sokoto, Saad Abubakar II, and Olu of Warri were not left out as drums and trumpets announced their arrival.
Large turnout
Strangely, due to the large turn out, many guests remained standing due to the unavailability of seats. Asides this, prayers were offered in Christian, Muslim and Ifa traditional religions ways to ensure equality of religions at the event. Co-chairman of the National Traditional Council,
His Eminence, Saad Abubakar, the Sultan of Sokoto, noted that the coming of Oba Ogunwusi to the throne was timely, saying the demand for recognition by youth should not be taken lightly.
The Sultan said all traditional rulers in the country would give the Ooni the needed support to lead the change to get the youth positively engaged being one of them.
Be virtuous, Osinbajo tasks Ooni: In his goodwill message, Vice President Osinbajo, who represented President Muhammadu Buhari at the event, said the throne of Ooni, being a deep and revered institution among the Yoruba people carries the responsibility of the race.
He, however, urged the Ooni of Ife to be virtuous and ensure his ascension is not just to make wealth and pleasure.
The Vice President said the land of Ife was blessed with the choice of a young and virtuous son of Ife.
Osinbajo said “As we celebrate with pomp today (yesterday), we are reminded of the great responsibility that is thrusted on you as the representative of the virtuous.”
While urging the newly-crowned monarch to take the responsibility of leading the people on the path of virtue very seriously, the VP prayed that God would give him (monarch) the wisdom and courage to lead the people.
Aregbesola tasks Ooni on nation building: On his part, the Osun State Governor Rauf Aregbesola said the throne of Ooni comes will lots of privileges, calling on the monarch to handle the responsibilities attached to the throne with fear of God and large heartedness.
He urged him to draw on the wisdom of the people by listening to them and advised him against pursuing naked personal interest at the expense of the larger interests of his subjects.
According to the governor, the Ooni must mobilize his subjects to support government in its bid to implement its programmes by enlightening them on the need to pay taxes. “New Ooni must work towards fostering unity among his subjects across, not a unity that will be achieved through coercion. Your attitude will be the cardinal determinant of your success. Try to carry along all in decision making,” Aregbesola said.
I’m for youth empowerment — Ooni Ogu 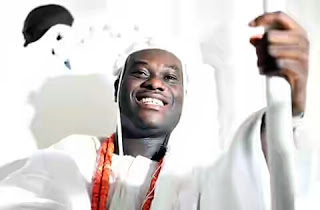