Nigeria Is Fast Becoming A Shame Under Buhari – Fayose

Ekiti State Governor, Mr Ayodele Fayose has raised the alarm that Nigeria under President Mohammadu Buhari was fast becoming a shame, describing the failed attempt by the All Progressives Congress (APC) to manipulate the Bayelsa State governorship election as clear invitation to anarchy.

The governor, who said it was shameful that the two elections conducted by the Independent National Electoral Commission (INEC) under Buhari’s kinsman, Prof Mahmood Yakubu were inconclusive, called on all well-meaning Nigerians and the international community to rise up in condemnation of the APC government’s plot to destroy democracy in the country.

Speaking through his Special Assistant on Public Communications and New Media, Lere Olayinka, Governor Fayose who said everything under Buhari was becoming inconclusive, added “If in three days, INEC could not conduct credible election in Bayelsa State of just eight local governments, one wonders what will happen during the general elections in 2019. The simple reality is that INEC under this Buhari’s kinsman, Prof Yakubu, who is fast becoming the classical example of incompetence cannot guarantee free and fair elections in this country.”

He saluted the courage of the people of Bayelsa State, describing them as “worthy heroes of democracy that stood their ground against agents of darkness that were prepared to short-change them by imposing a governor they do not want on them.”

Governor Fayose also congratulated the Bayelsa State Governor and the Peoples Democratic Party (PDP) candidate, Seriake Dickson for having the people of Bayelsa behind him, adding that “the people of Bayelsa have shown that their power is more than that of the Abuja political oppressors.”


He urged the governor and Bayelsa people not to lose their guard, saying; “Now that they have failed in their bid to use one local government to rig themselves to power, they will surely go back to their evil drawing board to plan fresh assaults.

“Therefore, Bayelsa people must henceforth sleep with their two eyes opened because the APC thieves come not only to steal, but to kill and that can be seen in the way and manner they murdered over 20 people just because they wanted power at all cost.”

25
While warning on the consequences of destruction of the legacy of free, fair and credible electoral process bequeathed on Nigeria by Dr Goodluck Jonathan, Governor Fayose said; “Nigerians, especially we in Ekiti State are already taking a cue from the Kogi and Bayelsa States experience and are getting prepared for future elections.” 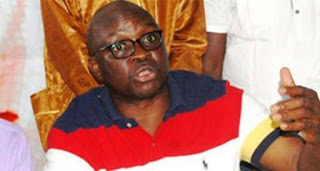