Posted by Unknown On December 06, 2015
Tags
ARTS AND LIFESTYLE

A Nigerian actor has been battling with illness for some time and it has become a public issue due to the hardship the sicknesses has caused him. The ailing actor is bedridden while his relations are running around to raise money for his treatment which is speculated to run into millions of Naira.

This ugly situation may have spurred his colleagues and stakeholders in Nollywood into seeking help in order to help Prince James Uche, a veteran actor that has served as cultural ambassador through Nollywood films. Prince Uche is left in dire situation due to this protracted illness that is threatening his life and has taken his sight.

Recently, the likes of Chike Bryan, Ngozi Nwosu, Romanus Amuta and Bruno Iwuoha have been in the news over the same situation and are healthy today due to the good will they got from kind Nigerians both in kind and in cash.

While it was reported that most of these people have fully recovered with Bruno Iwuoha recuperating after a successful surgery, Prince James Uche is yet to heave a sigh of relief as he is yet to get adequate attention that will enable him get medical care. Friday Flavour gathered that recently, the Governor of Abia State donated One Million Naira to Prince Uche.

This kind gesture is indeed very commendable and shows the level of appreciation Dr Okezie Ikpeazu has for Nigerian artists but it was also gathered that the amount is a far cry from what the actor needs, to get medical care. Musa Okezie a Nigerian film promoter and producer lamented that Uche needs more than a million Naira to get treatment and that the situation is beyond what only money can solve; and beckoned on Nollywood supporters to come to Uche’s aid both in cash and prayers.

Uche has been suffering from heart and kidney disease for about eight years, a fate that took Muna Obiekwe, early to his grave. Matters were made worst when Uche who has been off the screen for some years due to the illness was ejected from his residence in Lagos with his family. He is currently blind and only recognizes people through their voices. Rita Nzeribe a Nollywood actress told a story of how Uche was not able to see him but recognized her through her voice when she went to see the ailing actor.

She said she was so moved and was unable to control her emotions over the fact that her colleague who has been in different films and film locations with her was not able to see her but recognized her voice. Uche’s worst fear would have been over if this issue was discovered in the last administration.

Nollywood actors enjoyed goodwill from the former administration of Dr Goodluck Jonathan who was magnanimous and kind enough to come to the aid of Nollywood stakeholders like Chike Bryne while the formal governor of Lagos State and the present minister of power, works, and housing, Babatunde Fashola saved the life of Ngozi Nwosu who was sick during his tenure as governor.

Romanus Amuta was also given financial aid by the factional AGN president Ibinabo Fiberesima who attributed the gesture to Goodluck Jonathan for providing the funds. Nigerians are beginning to have doubts over the willingness of the present federal government to support the industry like his predecessor did.

Speaking with Friday Flavour, most people interviewed claimed that Nollywood saw their bumper period during the last administration which reflected in the way the dire needs of Nollywood stakeholders were urgently attended to.

Emeka Ezichi a staunch Nollywood supporter however admonished that Prince Uche should seek President Buhari’s support and see if he will respond, but doubts a positive result. Uche said “there is no harm in trial but I pray he gets a response”.

He also employed well meaning Nigerians to come to Uche’s aid. Prince Uche is no doubt in a very dire situation and while Nollywood stars are soliciting for funds to help treat him, they request that Nigerians should also remember him in their prayers. Musa Okezie said “with the prayers of Nigerians, 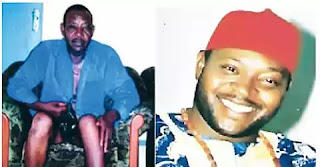