Home news Ooni Of Ife Gets Staff Of Office

Ooni Of Ife Gets Staff Of Office


Says new Yoruba nation in the offing
By Gbenga Faturoti, OSOGBO.
The ancient city of Ile Ife, the cradle of Yoruba race was agog yesterday as His Imperial Majesty, Oba Babatunde Enitan Adeyeye Ogunwusi, Ojaja II was presented with the staff of office and instrument of appointment as the 51st Ooni of Ife.
Osun State Governor, Ogbeni Rauf Aregbesola presented the staff of office and instrument of appointment to the monarch at Afewonro park, Enuwa square at the frontage of palace of Ooni.
The ceremony was attended by reputable dignitaries including the Vice President, Professor Yemi Osinbajo; Sultan of Sokoto, Alhaji Abubakar Saa’d, Senator Bola Ahmed Tinubu, National Leader of All Progressives Congress (APC), Chief Adebisi Akande, Governor Lagos, Ogun and Oyo States, Mr. Akinwumi Ambode, Senator Isiaka Ajimobi and Ibikunle Amosun among other dignitaries.
In his goodwill message, the Vice President, Professor Osinbajo, who represented President Mohammadu Buhari at the event, said the throne of Ooni, being a deep and revered institution among the Yoruba people carries the responsibility of the race.
He told the new monarch to exercise courage, integrity and loyalty to truth and charged him to be virtuous and used his position to work for the unity of the country.
He averred that Ile Ife is blessed to have a youthful monarch at the critical period in Nigeria history and prayed for the anointing of virtuous of leadership as explained in the book of Ecclesiastes, chapter 10 verses 16 and 17.
Before presenting staff of office to the monarch, Osun State Governor, Rauf Aregbesola, said as long as throne of Ooni comes will lots of privileges, calling on the monarch to handle the responsibilities attach to the throne with fear of God and large heartedness.
He urged him to draw on the wisdom of the people by listening to them and advised him against pursuing naked personal interest at the expense of the larger interests of his subjects.
According to the governor, new Ooni must mobilize his subjects to support government in its bid to implement its programme by enlightening them on the need to pay taxes.
“New Ooni must work towards fostering unity among his subjects across, not a unity that will be achieved through coercion. Your attitude will be the cardinal determinant of your success and try to carry along all in decision making,” Aregbesola said.
Commenting shortly after receiving staff of office, the new monarch said it is a rare privilege for somebody of his age bracket to be made Ooni adding that his emergence was beyond human imagination.
While dedicating the staff of office and instrument of appointment to the youths of Ife, Oba Ogunwusi urged the youths to work towards cohesion and team building by not continually condemning the leaders for their actions but join hands with the leaders in making necessary correction of the social ills in the society.
According to him, “let us all work towards the good side of the city of Ile-Ife.
He also preached peace and unity among the traditional rulers in the Yoruba land and political leaders stressing that there is strength in unity 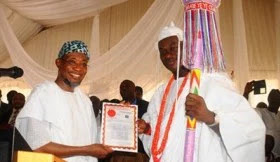