Eniola until his gruesome murder was in charge of the NURTW at Oshodi Ilupeju area of the state before he was gruesomely murdered in cold blood during All Progressive Congregation campaign rally on April 9th.

According to the police, Jamiu was arrested by FSARS opera­tives led by Inspector Banjoko Oluwemimo.

The police had earlier arrest­ed and arraigned two National Union of Road transport execu­tives one Muritala Aweniya 26, and Lateef Akinpelu 50 over the murder.

The charge sheet obtained by our correspondent revealed that the police arraigned Adedumoye on a three count charge border­ing on conspiracy and murder.

Count 1 read : That you Jamiu Adedumoye on or about the 9th day of April 2015 at Ajao Estate Oshodi, in Lagos Magisterial District conspired with others now at large to commit felony to wit murder and thereby commit­ted an offence punishable under section 231 of the criminal law of Lagos 2011.

Count II stated : That you Jamiu Adedumoye and others now at large on the same date and place, at the aforesaid Magiste­rial District unlawfully killed one Olayemi Mathew Eniola by using hammer and wood to kill him and thereby committed an offence punishable under section 221 of the criminal law of Lagos 2011.

Count III read : that you Jamiu Adedumoye and others now at large on the same date and place in the aforesaid magisterial district with intent to carry out some common purpose did take part in an unlawful assembly and thereby committed an offence punishable under section 44(4) of the criminal law of Lagos State 2011.

The accused pleaded not guilty to all the charges and the magis­trate Miss Abimbola Awogboro ordered the accused be remanded in prison custody.

In a related development , the wife of the slain NURTW boss Mrs. Bolanle Eniola through her counsel Abdullahi-Iya Yakubu had petitioned the Inspector Gen­eral of police ,Mr. Solomon Arase to conduct a thorough investiga­tion that will expose and arrest the brains behind the murder of her husband. Mrs Eniola alleged that some powerful individuals working are working assiduously to undermine the investigation by FSARS policemen” My hus­band was murdered in broad day light during APC political rally . He had decamped from the PDP to the APC but shortly after , he was murdered by a group of per­sons in the most cruel manner. These murderers used hammer and wood to hit him on his head and other parts of his body until he died. They have turned me into a widow and left me to cater for my children. These same gang leaders are trying to under­mine the the FSARS policemen from arresting and prosecuting the killers. Instead of them to face the law, they wrote petition to the Force Headquarters falsely accusing the FSARS team of bias after they have tried to bribe them to no avail. 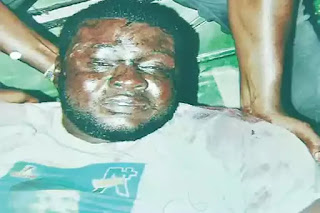