Magistrate O.A Ogunbowale of an Igbosere Magistrate’s court has remanded a 45 year-old Security personnel, Musa Mohammed, in prison custody over alleged rape of a 15 year-old boy.

The defendant is facing a three count charge bordering on assualt, unlawful sexual intercourse preferred against him by the police.

The prosecutor, inspector Asu Feddy, said that the security man, who resides at 30 Glover road, Ikoyi, committed the alleged offences on November 9, 2015, at about 4:10pm.

He said that the defendant unlawfully had sexual intercourse with a 15 year old boy through his anus.

Feddy alleged that the defendant sexually penetrated the boy without his consent and spilled semen on the boy’s anus, underwear and trousers.

The prosecutor said “The defendant forcefully raped the boy and spilled sperm all over his body when the boy went to urinate in the toilet.”

According to the prosecutor, the offences committed is punishable under Sections 170, 135 and 259 of the Criminal Law of Lagos state 2011.

The defendant pleaded guilty to the charge.

The Magistrate consequently, ordered that the defendant should be remanded in prison.

The case was adjourned to December 9 for the sentence phase. 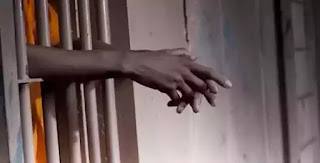