triple suicide bombing on the island of Koulfoua on the Chadian side of Lake Chad left at least 30 dead and 80 injured, according to media sources.


Speaking to the Associate Press (AP), Chadian security officials stated that three women were believed to be responsible for the attack. General Banyaman Cossingar, the Gendarmerie Director General, informed AP that the terrorist group Boko Haram is suspected to be behind the attack.

Earlier this year thousands of refugees reportedly fled to the island of Koulfoua in an attempt to escape the violence wrought by Boko Haram. Following an earlier suicide attack in the Lake Chad region this month, the Chadian government issued a state of emergency in the area. As a result of the state of emergency, more than 5,000 soldiers were deployed to the region.

Chad, along with Niger and Cameroon, has played a critical role in aiding the Nigerian Army in the latter’s attempts to retake portions of northern Nigeria from the terrorist group.

In response to these losses, Boko Haram has stepped up its attacks into Chad, Cameroon, and Niger. 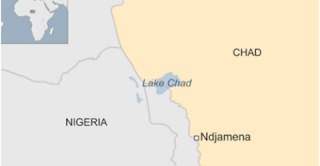